Money Train 2 is another first-class wild west-themed slot from Relax Gaming. This online slot is designed down to the smallest details. The sound effects and background music immerse you in this theme completely. Spin the reels as you watch a broken windmill turn behind an old broken train.

The Money Train 2 slot machine has a 5-reel, 4-row layout within the carriage. The object of the game is to line up matching symbols on adjacent reels starting from reel 1 and moving left to right to create any of the 40 paylines available.
With this slot, you can go on a journey full of danger and adrenaline. Take advantage of the numerous special features that will allow you to increase your bet up to 50,000 times. The RTP of this slot reaches as much as 96.40%, something you don’t see in other games. Your average RTP tends to go up to an incredible 98.00% if you fulfill the conditions of this slot.

Nowadays, finding a casino on your own is quite difficult. We have checked quite a few different gambling websites in India that offer Money Train 2 slot, and the results are shown in the table below.

How To Play Money Train 2

We are sure that you have already wanted to check out the gameplay of Money Train 2 free play. But playing for real money is available only for registered users. The casinos that are listed in the table above should be perfect for your needs, as they feature the highest security not only for Money Train 2 but also for the whole site. You can use this step-by-step guide on how to play Money Train 2 real money:

First of all, choose a reliable casino with good bonus offers.

The gameplay is no different since this slot is delivered by one provider.

Don’t forget about the welcome bonuses, which can, under certain conditions, increase your initial deposit by several times. This is a lucrative chance to get more profits with the possibility of cashing out the bonus you received.

Enter Money Train 2 into the search box and the system will automatically give you the slot you are looking for.

Decide on the amount you want to bet on.

This step should be worked out in some detail in the future, as the management of funds in the slots is the primary task of the player in order not to stay bankrupt.

When you have decided on a bet, make it.

Put in the required amount of money and click on “Spin”. Play Money Train 2 and watch how your luck works for you.

The highest-paying symbol is the Necromancer. Right behind him are the Collector, the Sniper, and the Paymaster. The lower symbols of the slot machine Money Train 2 are the standard card symbols. The Skull symbol is the wild one. 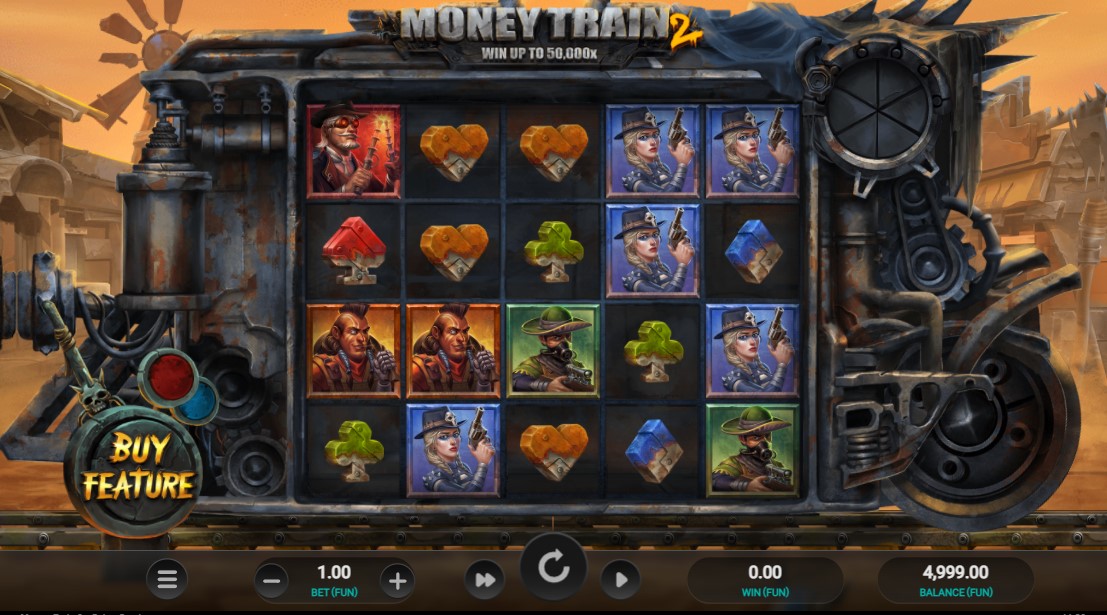 At first glance, Money Train 2 has a western theme. In fact, it is a bit more complicated and modern, because the action in this version takes place in the future. You will find a unique blend of steampunk with a western motif.

The gameplay takes place in a desert town. A modern soundtrack with western elements gives the desert city landscape a futuristic, exciting atmosphere. The visuals are attractive and smooth, which creates a great gameplay experience.

You can read the table below, which will familiarize you with the multipliers during the Money Train 2 game. More detailed information you can find in the game itself.

The last part of Money Train had a huge number of bonuses and the second part had just as many. The old features have been strengthened and players even get a new one, which works great and affects more than just one aspect of the game. You will like it, as it adds an adrenaline boost to the game that was quite lacking in the first part of the game. It also smooths out the angles when not enough scatters are dropped to trigger the main event.

Meet Respins at Money Train 2 casino, a brand-new feature. When two scatter symbols appear on the reels, it is activated. There is a re-spin after each scatter shows a multiplier, which is then added. Up until a winner shows up, the number of spins increases by one for each spin which doesn’t result in a win. The multiplier accumulated is added to the total when a win occurs.

The most significant one is the Money Cart Bonus round, which starts when three or more scatter symbols appear. As night falls, a new grid that only activates special symbols appears on the screen. During the first three spins of the bonus game, the scatters that were activated remain fixed in place and add their values to the wins multiplied by the total stake. The number of spins is reset to three if any symbol triggers the round, and their values are added to the winnings multiplier. When there are no more spins left, the feature is over.

Different symbols are dropped throughout the bonus game; each has a value that is added to the multiplier. A few of them come with extra features, such as

There won’t be a test on this list of symbols next, so relax. Let’s just say that each symbol raises the bet multiplier, and some of them also have a unique modifier that significantly raises the sum. In a subsequent turn, if the reel is already full of symbols, an additional reel will be opened, giving the symbols more room to be placed. The number of additional reels in the game is capped at 2.
The game also includes a bonus buy-in feature. The Money Cart bonus round is triggered on the following spin if the wager size is 100x.

As mentioned before, our review showed that the RTP of Money Train 2 is simply astounding. The average number is 96.4%, which can be boosted to 98% under certain conditions. This is a high wagering level, as most slots do not even reach the 96% level.

In case you don’t know what RTP is, simply put, it is a mathematical average number that indicates the return of bets to the player. Even shorter: The higher the number, the better for you.

The volatility of the slot is high. It’s hard to say whether this is good for you or not because it’s subjective and depends on the preferences of each player individually. For example, with this slot, you will win a small number of times, but if you do win, you will immediately get a huge amount of money.

The list of benefits is also purely subjective, but what we liked was this in Money Train 2: