Age of the Gods Slot - The Most Up-To-Date Review

Age of the Gods Slot Review

The unique feature of the Age of the Gods is that the jackpot win doesn’t depend on the outcome of the event. You can find out more detailed information about this game machine in our Age of the Gods slot review.

Playtech developers have again turned to ancient Greek mythology, choosing a theme for new online slot machines, so they have released a whole series of colorful Age of the Gods video casino slots dedicated to the gods who allegedly lived on Mount Olympus in the old days.

It is the first model of this line that will be discussed in this review. It should be noted that this is an amazing game with wonderful graphics, spectacular animation, various bonus options, and other benefits.

The Age of the Gods slot machine has five reels and twenty active lines. They are constantly active. So, gamblers need to place equal bets in the range from one cent to twenty-five euros. They can bet no less than twenty-five cents and no more than five hundred euros per spin.

Fifteen characters appear on the screen at the same time. Certain combinations are formed from them. The Age of the Gods slot offers various types of pictures, several types of free spins, additional multipliers, generous prize payouts, four progressive jackpots, and other intriguing features.

The formation of winning chains from simple elements follows the standard rules. Several identical pictures are required, which should line up on the involved lane next to each other, starting from the first column. The size of the payout is determined by multiplying the bet per line and the coefficient of the resulting combination (from x12 to x10,000).

Interestingly, there is no doubling game in the Age of the Gods. The manufacturer’s stated theoretical return ranges from approximately 94% to 95%. This is quite a normal figure for games with progressive jackpots.

Demo: Play Age of the Gods for Free

Moreover, the opportunity to play free the Age of the Gods slot without logging in and without a deposit is a great chance to practice and thoroughly study the rules of this game (especially games with bonuses and jackpots). This allows you to gain confidence and familiarize yourself with all the functions before making your first real bet. 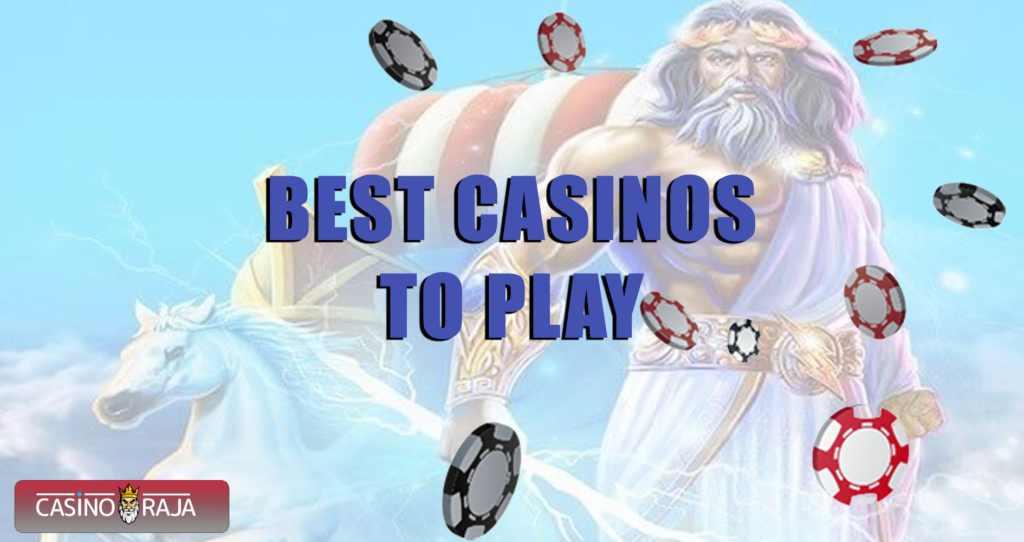 You will find Age of the Gods on various reputable portals with Playtech software. Let’s enumerate the most popular online casinos:

Some of the sites feature not only the original pokie but also the Age of the Gods live Roulette version – a game-themed Roulette table with real croupiers.

Age of the Gods Bonus 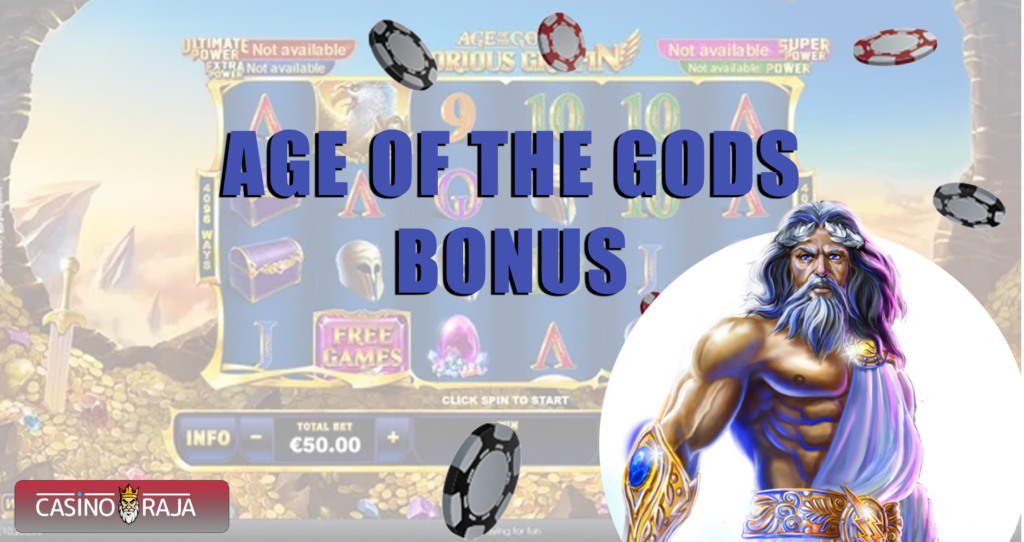 The Greek gods are generous and offer loyal players free spins, special rounds, and, most of all, tempting progressive jackpots. Below is some information about these bonuses:

Let’s describe the prize functions of the slot: 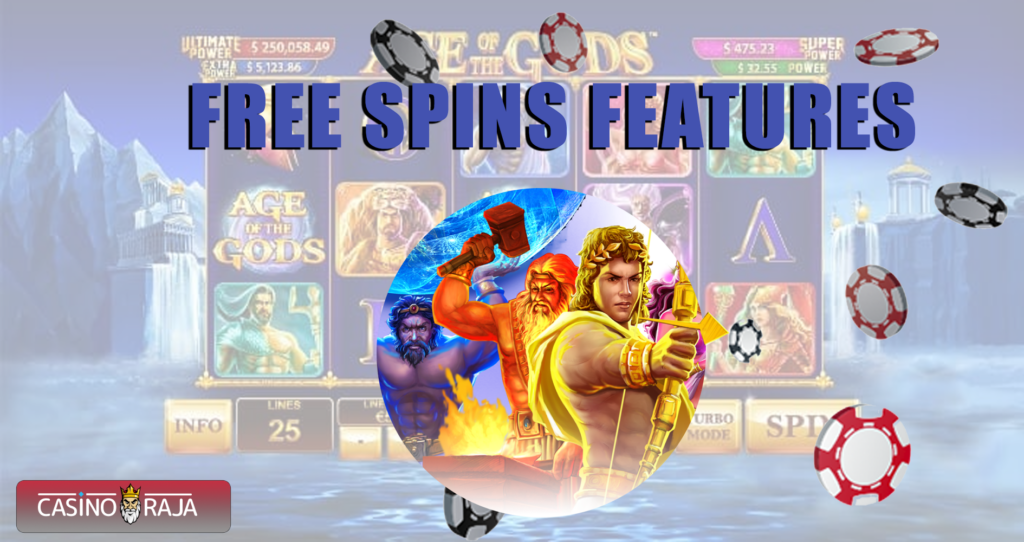 Below are the 2021 Age of the Gods free spins features. There are always nine of them. The casino makes a bet on them for the client:

After the current stage is completed, twenty coins appear again to determine the next type of free game. This continues until you see Hades.

Age of the Gods Jackpot Feature

It should be borne in mind that they increase due to deductions from clients’ rates. Every player who bets real money has a chance to win the jackpot. The larger the bet, the higher the likelihood of participating in the special round. When it starts, twenty coins appear on a separate screen. They must be chosen until three logos of one of the progressive jackpots appear, which will go to the participant of the drawing.

Age of the Gods Mobile 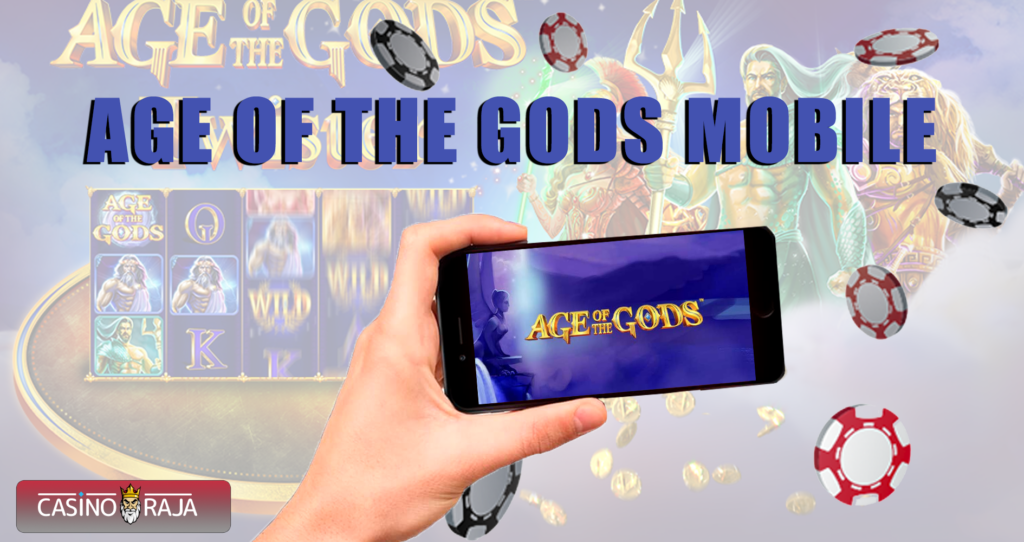 The Age of the Gods game is made using HTML5 technology. The appearance is the same, both when launched from a PC and a mobile device. You don’t need to download anything to play on your phone. Use Google Chrome for Android and Safari for iPhones. In addition, 2 Gb RAM and 3G network may not be enough for a mobile game. Critical freezes of any Playtech video slots are possible.

Considering all of the above, in the Age of the Gods slot review, we can say that Playtech’s developers delighted us with an excellent game. This model is very colorful and incredibly fun. Cool free spins, the ability to compete for jackpots at any bet, impressive payouts, spectacular animation – all this will attract the attention of numerous users.

Note that the level of variance is quite high. Be prepared for a rather long series of empty spins and remember that they are always followed by big wins.